The Southeastern Massachusetts chapter, based in Taunton, Massachusetts, is led by Muriel "Rusty" Watterson. They have placed AEDs in area schools and public buildings and have trained well over 1,000 students in CPR/AED. The chapter is a strong advocate for a statewide AED mandate for schools. Vice President, John McCaul also hosts the local public access television program, For Your Information. More information on these successes and activities can be found at www.operationdefibrillator.org.

Muriel Watterson is the president of Operation Defibrillator, a group dedicated to ensuring that all public facilities and public safety vehicles are equipped with AEDs and that there is proper training and application of CPR and AED procedures.

On April 18, 2003, the Watterson Family donated an AED to Bouine High School in memeory of Patrolman "Lenny" Watterson. Since Operation Defibrillator's inception in 2003 by Muriel Watterson, John McCaul, and SCAA Committee Members Bob Schriever and Scott Meagher, it has placed AEDs in three local and private Taunton high schools. They have also placed an AED in City Hall, Taunton Senior Citizens Center, and DPW. They are now working on getting an AED at the Retirement Board.

In February 2006, they financed the CPR and AED training of management at the Senior Center. Major funding has ben provided by Day State Gas Company, Morton Hospital Retirees Association, Taunton Charitable Association, and family and friends.

Their mission is to equip all public facilities, such as schools, offices, senior centers, and public safety vehicles with AEDs, and to establish monthly AED training.

State Representative Shaunna O’Connell, along with Bob Schriever, past chairman of the Sudden Cardiac Arrest Association, and Taunton resident Muriel “Rusty” Watterson, president of the SCAA Southeastern MA chapter, presented an AED to the Disabled American Veterans Chapter 57 that was generously donated by the national SCAA. 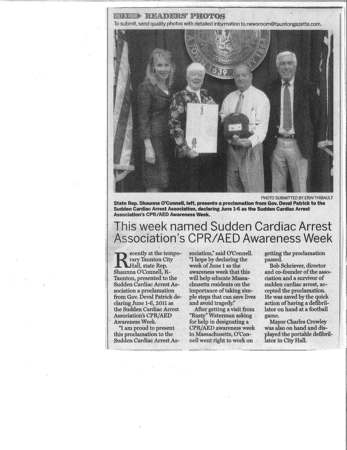 SCAA Chairman Bob Schriever conducts a training program at a church in Seekonk, Massachusetts in November 2010. Attendees had the opportunity to receive CPR certification from the American Heart Association. 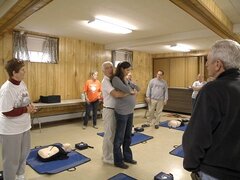 While members of the Veterans of Foreign Wars in Taunton have risked their lives fighting overseas, a lifesaving device has recently been donated to the post to help prevent sudden deaths on the home front.

Defibtech, a Connecticut-based company, donated a defibrillator to the Taunton VFW, which was presented to the post on Wednesday night.

Laura Geraghty said she was stocking up on groceries at Wal-Mart Thursday when she heard screams a few aisles away. A man suffering an apparent heart attacked had collapsed in the store.

Geraghty, who was brought back to life last year after her heart stopped beating for 57 minutes, was carrying a pocket CPR device that helped her to administer life-saving chest compressions to the dying man.

Muriel Watterson named as Volunteer of the Week

As a retired school nurse for the city of Taunton, Massachusetts, Muriel "Rusty" Watterson knows the statistics and the importance of how seconds can mean life or death. She started SCAA's Southeastern Massachusetts Chapter in 2003. In mid-December, Rusty was named as the Volunteer of the Week by the Taunton Daily Gazette. She said that what she has learned the most is that once people are educated and recognize the importance of AEDs, they also see how great the need is.

Corr, men honored as heroes by council
Police officer Peter J. Corr and several city firefighters were recently honored at a city council meeting for helping save a man's life at the Elk's Club back in January.

Bob Schriever, the national chairman of the Sudden Cardiac Arrest Association, and Muriel "Rusty" Watterson, the organization's local chapter leader, were on hand at City Hall to hand out citations and pins to the first responders.

Mayor Charles Crowley also presented them with citations from the city.

When referee Bob Schriever was unconscious after collapsing on a Wellesley football field, he could have joined the 95 percent of sudden cardiac arrest victims who don't survive.

Schriever, of North Attleboro, who was stricken during a football game between Wellesley High School and Newton North, was saved by a defibrillator brought to the game by a local sports trainer. Defibrillators deliver an electric shock to the heart to treat sudden cardiac arrest.

"I remember saying second down, gentlemen, second and seven... that's all I remember," Schriever told West Bridgewater seniors at a school presentation Monday morning. "For me to stand here before you today... I'm one of the lucky five percent."