Cable-TV companies are the stocks for all seasons. Investors sell them in both good times and bad.

Despite riding through the recession so far much better than advertising-dependent entertainment companies, in profit terms, cable stocks remain mostly depressed.

Entertainment stocks typically fell further than cable companies in last fall's market plunge but recently have rallied in anticipation of a recovery in advertising. So while Comcast has fallen 38% over 12 months, media stocks such as Viacomand Walt Disney are down less.

Media conglomerates are, on average, trading at about seven times projected 2009 earnings before interest, taxes, depreciation and amortization, or Ebitda, according to Barclays Capital. Comcast and Time Warner Cable are less than five times.

Investors have bid up media stocks too much. Business conditions may have stopped their plunge but that doesn't mean advertising is bouncing back. The bankruptcy filing of General Motors can't be good for the ad market. GM boosted its ad spending 11% last year, according to TNS Media Intelligence, even as the auto category shrank. As GM is the biggest in the auto category, any reduction in GM's spending this year will likely hurt media companies. 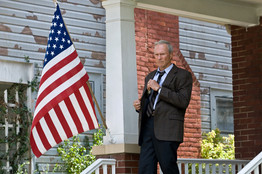 More important, some of the selloff in media stocks last year related to concerns about secular shifts in businesses like DVD sales. Those concerns remain as valid today as last fall, yet investors appear to have put them to one side. More important is the hope of a cyclical upturn.

When it comes to cable stocks, though, investors are ignoring cyclical strength to focus on long-term threats. Admittedly, cable companies are affected by the economy. Fewer homes being built reduces demand, while budget-conscious consumers may cut down on premium extras like digital-video recorders.

Even so, in the past two quarters, as Ebitda at media companies fell, cable operators saw growth. For 2009, Barclays projects entertainment companies' Ebitda will decline by an average of 0.9% while cable and satellite will expand 4.9%.

Worries about cable relate more to competition and technology shifts, as consumers start watching more video online. The threat posed by Verizon Communications and AT&T is real, as each takes market share. Near term, though, cable operators still can expand. Gabelli analyst Christopher Marangi projects compound annual growth for the cable industry of about 4% in revenue and 5% for Ebitda between 2008 and 2012. That is assuming Verizon and AT&T achieve 20% penetration of homes with their video offering by 2012.

But Internet video is arguably more a problem for the media companies that own cable channels than the cable operators. While both lose revenue if people cut off their television subscription in favor of online video, the cable operators' costs go down, because they no longer pay as much to the channel owners. Also, to watch video online consumers must pay for the broadband services offered by, among others, the cable operators.

Neither cable operators nor media companies will emerge unscathed from the transformation of entertainment usage wrought by the Internet. But at these valuations, cable operators may be a better bet for investors.