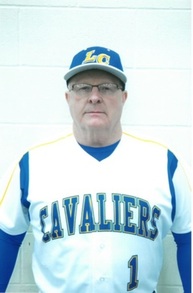 Coach King is a 1966 graduate of Lima Senior High School. He received his

King's first baseball coaching position came in 1977 at Sidney High School. He coached the Yellow Jackets for 25 years. Taking a four year break to watch his four children play in their respective college sports, King returned to coaching baseball again at Jackson Center High School in 2006. He remained there until 2008, when he took over the baseball program at Lehman Catholic High School. He is still employed as the varsity baseball coach at LCHS.

King, a military Veteran, served in the United States Marine Corps. He is in the Athletic Hall of Fame at Ohio Northern University, along with Hall of Fame Honors in the Miami Valley Baseball Coaches Association.

He has amassed a record of 603-389-3. His teams have won 7 conference titles, 10 sectional titles, 8 district titles, and 8 regional appearances. King has also been names Coach of the Year 10 times and his teams have had 5 "top ten" poll finishes. King has coached numerous players that have gone on to play at the collegiate and professional levels, including a number one draft choice (Tom Goffena) of the Toronto Blue Jays.

A long-time member of the OHSBCA, King has served many years as a State Poll Voter. He had the honor of being selected to coach in the Mizuno All -Ohio Series. In addition to coaching baseball, King also coaches high school golf and middle school girl’s basketball. Dave King has been a 3-Sport coach for 35 years.

Dave has been married for 42 years to his supportive wife, Charlene. They have four grown children, Wendy, Bryan, Jeffrey and Michael. They are also the happy grandparents of five, KJ, Keaton, Khye, Kaylene, and Griffin.