(December 15, 2016) From prominent higher education institutions to popular sports teams, mumps have been in the spotlight. This year has seen more mumps outbreaks than any other year in the past decade. Reported cases are nearly tripled from 2015, according to the Centers for Disease Control and Prevention (CDC). That's why it's important to make sure patients minimize their risk of contracting the highly infectious virus.

Mumps is a contagious viral infection that impacts the salivary glands. When infected, the glands swell, causing an individual to have puffy cheeks and a swollen, tender jaw. Other common symptoms include fever, headache, muscle aches, tiredness, and loss of appetite, all of which can last up to 10 days. The virus is spread through saliva or mucus, which is passed along through coughing, sneezing, and even talking. 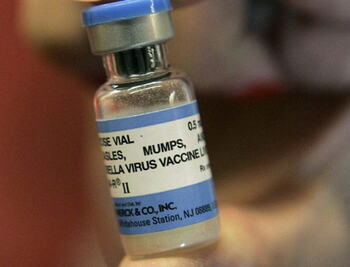 Today, cases of mumps are typically seen among teenagers and young adults. A major contributing factor to the spread of mumps is being in a crowded environment. Not surprisingly, schools and college campuses are a breeding ground for potential outbreaks because students are in such close proximity. This fall, Arkansas experienced an outbreak of mumps in the northwest region of the state with more than 1,000 confirmed cases across several school districts. The year also saw reported cases of mumps making headlines across universities around the country. Most recently, the University of Missouri has identified 128 confirmed or probable cases since the start of the school year. Outbreaks were also reported at Yale University, Tufts University, SUNY Oswego, University of San Diego, and Harvard University among others.

Similarly, athletic teams, where members share locker rooms, eat together, and travel together for extended periods of time, are more prone to outbreaks. In November, the SUNY New Paltz swim team's season ended abruptly after a number of swimmers were diagnosed. Perhaps, the most notorious example of a mumps outbreak in sports occurred during the 2014-2015 NHL season. At least 22 players on six different teams were diagnosed with the virus.

Mumps is usually a mild disease and disappears with time. Treatment for those infected is focused only on alleviating the symptoms. In some cases, complications can occur. According to the CDC, up to 10 percent of males who have mumps experience testicular inflammation, known as orchitis, and in rare cases this can lead to sterility. Other complications as a result of mumps include pancreatitis, deafness, meningitis, and encephalitis, but these too remain rare.

To prevent mumps and reduce outbreaks, the Measles-Mumps-Rubella (MMR) vaccine is recommended. According to the CDC, the vaccine prevents most, but not all cases of the virus, and reduces severity if infected. Two doses of the mumps vaccine, which should be given around the ages of one and four years old, prevent about 88 percent of cases.

Since the vaccine has been introduced, there has been a more than 99 percent decrease in mumps cases in the United States. Today, the incidence of mumps cases can range from around a couple hundred to a couple thousand per a year. While current outbreaks are far less than the past and still relatively uncommon, high immunization rates are required to continue to decrease the likelihood and reduce severity of outbreaks.