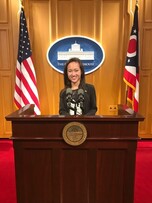 How did you get interested in the profession of pharmacy?
As a first generation American, I grew up learning about the American and Chinese lifestyle. My parents were both believers in Chinese (herbal) medicine. Whenever I travelled to Cleveland or China with my parents, we would always make a trip to a Chinese medicine shop. Growing up, I was skeptical and hated Chinese medicine (mostly because of the smell of the herbal medications). However, my mom became ill when I was in the 6th grade and later again when I was in high school. Because she trusted Eastern medicine, she decided to travel to China for treatment both times. When I was in high school, I knew I wanted to be in a profession where I can help people. Health has made a huge impact in my family and I knew I wanted to be in that field. My science teacher back in high school wanted me to consider a career in pharmacy so I looked into it. When my mom relapsed, I started to become interested in pharmaceuticals and “natural” medicine. I began to volunteer in an inpatient pharmacy at Mercy Medical Center in Canton, which furthered my love for pharmacy.

Why did you choose OPA as a rotation site?
If you would have asked me in high school, or even during my undergraduate career, if I could see myself in politics, I would have laughed and said no. It was not until the summer before pharmacy school that I began to fall in love with advocacy. I was working for Kroger when tramadol became a controlled substance. That was the time I realized the amount of impact the government had on my profession. Hydrocodone then became a schedule II controlled substance later that year, which led to many discussions with my disappointed patients. During these discussions, I realized that I am one of the largest advocates for my patients. I am the one who contacts the doctors and insurance companies about patient concerns. I am the one to give the patient good news and bad news. I am the one who they trust. I started to see the great impact that pharmacists can have on patients and the potential for pharmacists to move forward to make a bigger impact. I started to become more involved through my APhA-ASP chapter and OPA. I have spoken with many representatives on the state and federal level to advocate for both my patients and profession. I decided I wanted to become more involved with OPA so I decided to apply for the OPA APPE rotation.

What was the most significant or surprising experience at OPA?
I had the opportunity to attend an interested party meeting with a couple representatives regarding a bill that OPA opposed. The meeting was made up of parties who were against legislation to bring up the flaws that were associated with the bill. It shocked me to see the opponents work together with the representatives to “fix” the bill even though the opponents had no interest in passing the bill. It makes sense though – you wouldn’t want a bill to have flaws if it passes and becomes law; it’s better to have some input rather than none.

Why I think it’s important to maintain my OPA membership after graduation.
Pharmacy is one of the most regulated professions and the legislators have a huge impact on what pharmacists can or cannot do. Without membership support, pharmacists would have very little input on the legislation that will impact our profession and patients.

Hobbies:
I love spending time with my friends, family, and my pets (I have a puppy and a cat). I also like cooking and baking, finding new restaurants (especially during happy hour), traveling, and finding new arts and craft projects.