Capitalism and Civil Society in the British Enlightenment 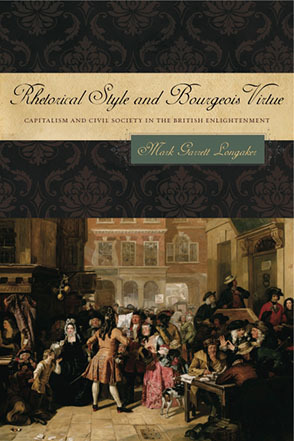 During the British Enlightenment, the correlation between effective communication and moral excellence was undisputed—so much so that rhetoric was taught as a means of instilling desirable values in students. In Rhetorical Style and Bourgeois Virtue, Mark Garrett Longaker explores the connections between rhetoric and ethics in the context of the history of capitalism.

Longaker’s study lingers on four British intellectuals from the late seventeenth to the mid-nineteenth century: philosopher John Locke, political economist Adam Smith, rhetorical theorist Hugh Blair, and sociologist Herbert Spencer. Across one hundred and fifty years, these influential men sought to mold British students into good bourgeois citizens by teaching them the discursive habits of clarity, sincerity, moderation, and economy, all with one incontrovertible truth in mind: the free market requires virtuous participants in order to thrive.

Through these four case studies—written as biographically focused yet socially attentive intellectual histories—Longaker portrays the British rhetorical tradition as beholden to the dual masters of ethics and economics, and he sheds new light on the deliberate intellectual engineering implicit in Enlightenment pedagogy.

“The substantive chapters of this book repay close reading owing to the careful way that Longaker highlights and synthesizes important intellectual and historical currents that shaped a diverse group of English and Scottish thinkers across three centuries.”—Mark E. Button, The Review of Politics

“A learned, provocative, impressive book. For scholars in eighteenth century, it is a must read.”—Arthur Walzer, The Quarterly Journal of Speech

“Longaker gives us a nice overview of changing visions about how the budding capitalist civilization in Great Britain developed a new ethics and aesthetic taste to acquire sufficient symbolic and cultural capital in competition with the dominant aristocracy.”