As we previously reported, in December Governor John Kasich signed several pieces of pharmacy legislation into law. Now this week, those bills become law. See below for information on the new laws taking effect.

The Ohio State Board of Pharmacy has also released a guidance document so that pharmacies can be sure they are compliance with the law. That document link can be accessed here,2013_layout_interior.

OPA is working on a supplemental home-study article for pharmacists & pharmacy interns whose previous training did not include the additional vaccines and diseases. Once the home-study is approved by the board of pharmacy, it will be available for purchase on the OPA website, www.ohiopharmacists.org. OPA is updating its current draft protocols to reflect the changes and is creating draft protocols for the additional vaccines that pharmacists and pharmacy interns will be able to administer. The new protocol package will also be available for purchase on the OPA website. 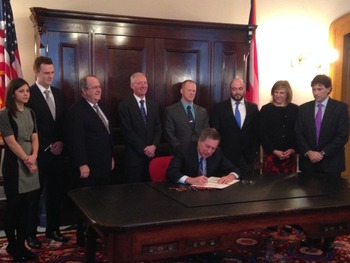 SB 258, the fair pharmacy audit act goes into law on March 23. The act, which passed through both Senate and House chambers unanimously, establishes standards for the performance of pharmacy audits by pharmacy benefit managers (PBMs) and other auditing entities. SB 258 will make auditors subject to reasonable standards by placing guidelines on when and how audits are conducted.  These standards include:
...read more...,2013_layout_interior

Note: A pharmacy can also do any of the following when a pharmacy audit is performed:
...read more...,2013_layout_interior

Note: After a pharmacy audit is completed: ...read more...,2013_layout_interior

With the new law going into effect this week, please keep these provisions in mind moving forward. OPA members who are subject to an audit and  feel that the new law is not being followed, should contact Antonio Ciaccia at OPA at aciaccia@ohiopharmacists.org.

The Ohio State Board of Pharmacy has also released a guidance document so that pharmacies can be sure they are compliance with the law. That document can be accessed here,2013_layout_interior..

These new laws are the end result of years of hard work by volunteers, collaborative organizations, and staff. We thank you - our OPA members - for your continued support. There's more to come.

Outside of the support of volunteers and members, and the work of OPA's legislative staff in building coalitions and meeting with legislators, supporting political campaigns is a huge part of the advocacy process. We need to build on these recent success by working towards even bigger goals in 2015. Please consider financial support of our legislative efforts by contributing to the OPA Pharmacy PAC.  100% of Pharmacy PAC money contributed by pharmacists goes to help candidates who support pharmacy in Ohio.