Each year on October 1, the International Classification of Diseases, Tenth Edition, Clinical Modification (ICD-10), is updated to reflect diagnostic  changes in medicine. Since 2010, no major updates have been permitted so that physician practices, facilities, and payers in the United States could update their systems during the transition from ICD-9 to ICD-10, which went into effect on October 1, 2015.

APA has advocated that changes be made to ICD-10 to reflect the updated diagnoses in DSM-5. These include changes to align the terminology used in DSM-5 with that used in the mental health chapter of ICD-10. In response, the Fiscal Year 2017 version of ICD-10, which takes effect October 1, will include most of DSM-5’s terminology.

In some cases, new codes have been added to ICD-10 to accommodate the new diagnoses that were added to DSM-5. The new codes will allow more accurate diagnostic recording, improved communication among clinicians, and better means for collecting prevalence data.

As of October 1, the codes for the DSM-5 disorders in the chart below will no longer be valid. The new codes listed in the chart must be used in their place.

A printable version of the list is available at http://APAPsy.ch/ICD-DSM and includes the diagnoses in both alphabetical order and the order in which they appear in the DSM-5 classification. 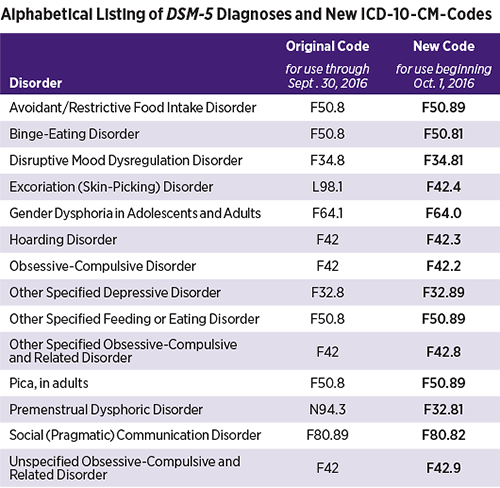